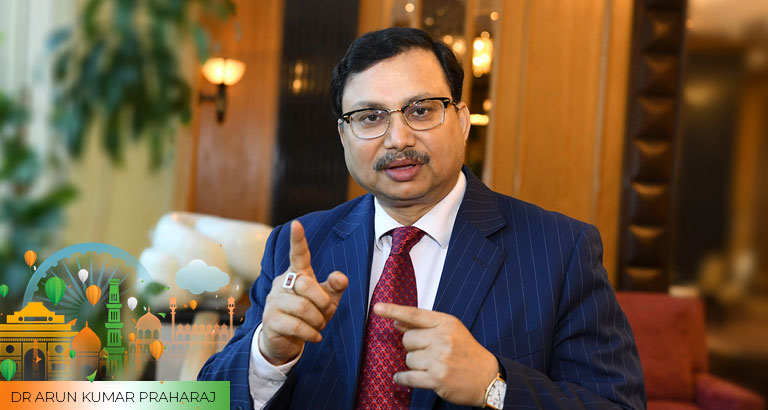 Owing to his tremendous contributions to the upliftment and promotion of Brand Odisha the CEO of Dadabhai Group of Companies, Dr Arun Kumar Praharaj, was felicitated as the Honorary Goodwill Ambassador for the Kingdom of Bahrain by the President of Vishva Odisha Foundation and Speaker of the Odisha Legislative Assembly, Dr Surya Narayan Patro.

The appointment was made as a part of the Global Odia Awakening Campaign led by the Vishva Odisha Foundation, an organisation working towards the development of Odisha in coordination with the Odia diaspora to promote Brand Odisha. “The East-Indian state of Odisha, often recognised as the abode of its principal deity, Lord Jagannath is said to be India’s best kept secret. Now is the time to reveal Odisha’s glorious past, rich cultural heritage, natural beauty, magnificent architecture, exotic apparel, delicious cuisine, amazing handicrafts and beyond,” says Dr Praharaj.

Having been previously awarded as one of the ‘Top 20 most inspirational personalities of Odisha’, Dr Praharaj considers it an honour to be appointed the Goodwill Ambassador and Chairman of the International Council. “My key responsibilities are to coordinate with Goodwill Ambassadors across the world and enable an exchange of economic, cultural and developmental programmes in the overall interest of introducing and strengthening Brand Odisha globally,” he explains.

Over the past two decades, Dr Praharaj has worked to unite the Odia diaspora in the Kingdom. “I have organised several successful cultural exchange programmes to enable a free flow of heritage and art between Bahrain and Odisha,” he explains, adding that the Odisha Day celebration is one such event wherein members of the Ministry and diplomats are introduced to Odia culture.

Celebrating such events along with traditional festivals and eminent historical dates helps the community feel at home, miles away from home. “More importantly, I have been actively involved in providing distress relief to the less fortunate in coordination with the Indian Embassy, Indian Community Relief Fund (ICRF) and several other local organisations of Odisha,” he says.

“This is all possible due to the united efforts of my community members along with the support of Bahraini and Indian authorities, the Indian Embassy, Vishva Odisha and the magnanimous Chairman of Dadabhai Group of Companies, Mr. Mohamed Dadabhai,” he adds.

During the COVID-19 outbreak, Odia community volunteers provided relief and assistance to those in need. “This included food, air tickets for repatriation and essential items across labour camps. We also kept an up-to-date database to facilitate Embassy registration of estranged migrants at all times,” he says.

Dr Praharaj’s efforts led to the organisation of direct repatriation flights to the capital city of Odisha, Bhubaneswar. “We also assisted multiple migrant workers in acquiring the settlement of their dues from various employers prior to their return. Most importantly, we were available at all times to provide moral support during such distressed times,” he says.

In the near future, Dr Praharaj aims to coordinate with the Central Government and Government of Odisha to create a Non-Resident Odia (NRO) Ministry to look after migrant Odias and their families back home. “Moreover, I have been liaising with ‘Odisha Mo Parivar’ (a special wing of the Government of Odisha) to provide migrant labourers with relevant employment opportunities and other required assistance,” he says.

Having been a resident of Bahrain for over 24 years, Dr Praharaj expresses his gratitude for the Kingdom’s inclusive and progressive beliefs. “I intend to create an Odia E-learning Centre and library in Bahrain so our younger generation can learn their mother tongue and have access to rich Odia literature and Jagannatha culture which inculcates harmony and universal brotherhood,” he adds.

Sharing a message with the community, Dr Praharaj concludes: “The society has given you so much. It is time to give back to the society. It is important to remember that incredible possibilities can be created when we stay true to doing work that is bigger than ourselves.”