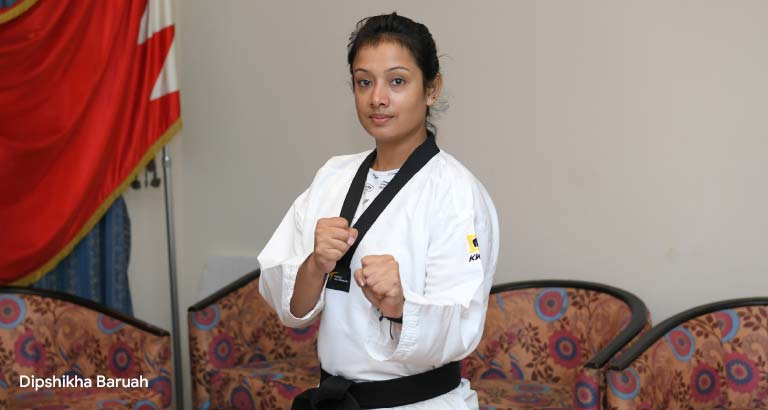 Dipshikha has been awarded ‘Best Fighter’ twice at the district level in her native Guwahati, and has won nine gold medals at the state level, besides being a national referee in India.

Bahrain-based expat, Dipshikha Baruah, is the first woman from the Indian state of Assam to become an international referee in Taekwondo. She chats with Behnaz Sanjana about all things strength and grit.

Posing for the photoshoot for this write-up, Dipshikha enthusiastically asks if we want some of her in Taekwondo action. Her passion for this martial art spills over from her smiling eyes. “The Sports Authority of India selected me to be trained in Taekwondo while I was in school in Assam, in India,” she says. “I began learning it in 2007.”

The physical education teacher, at the Indian School Bahrain, has professionally trained in Taekwondo for 12 years and holds a 3rd Dan black belt (the third grade within the prestigious black belt level).

Her road has been long and arduous, with hours of training for state, national and international championships. But the blood, sweat and tears have paid off. Representing the Bahrain Martial Arts Federation, Dipshikha qualified as an international referee in the recently held 114th International Referee seminar held in China, organised under the aegis of World Taekwondo, South Korea.

This global qualification makes her the first ever woman from Assam, and the first female Indian expat in Bahrain, to have achieved this feat. “Now my previous hard work seems like nothing; I have many more miles to go,” she says. 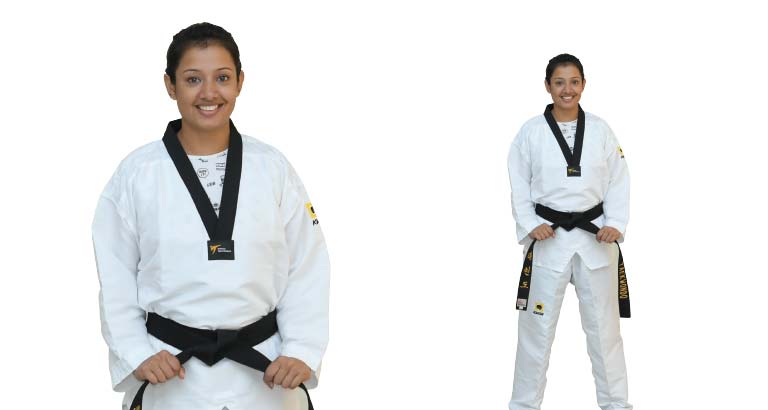 Dipshikha shares an inside story: “The whole experience has taught me the meaning of the word ‘fail’, because I was unsuccessful at the previous seminar, held in Australia. I was in tears, but my husband reminded me that I would truly value success only if it followed failure. He pushed me to learn from my mistakes, improvise, adapt and overcome. And this made me try again like a true fighter!

“Never in my wildest dreams had I thought of coming this far; becoming an international referee of the sport I love. I am blessed with such a supportive family, which includes my in-laws,” says the second child of four sisters. “I believe that talking to my father just before a match makes me win. And I’m so lucky to have a husband who has always encouraged me to follow my dream. He drives me to every practice and waits for me patiently for hours,” she giggles.

Donning her dabok (the taekwondo uniform), transports Dipshikha to a different world. “I really enjoy the fight. This sport has given me discipline, courage, self-defence and enthusiasm, and taught me to be true to my soul. It has made me the person I am today; it’s my life.”

She is happy to see that these days, young girls are taking sports seriously. “The benefits are lifelong, physically and mentally. Initially, the girls in the school were reluctant to participate. But now, our girls’ team wins medals in inter-school sporting competitions. Martial arts teaches children discipline, self-respect, respect for seniors, a never-give up attitude and, importantly, self-defence.

“My Taekwondo uniform and daily practice is everything to me. Even after I have my own children, I will continue practising this martial art.”