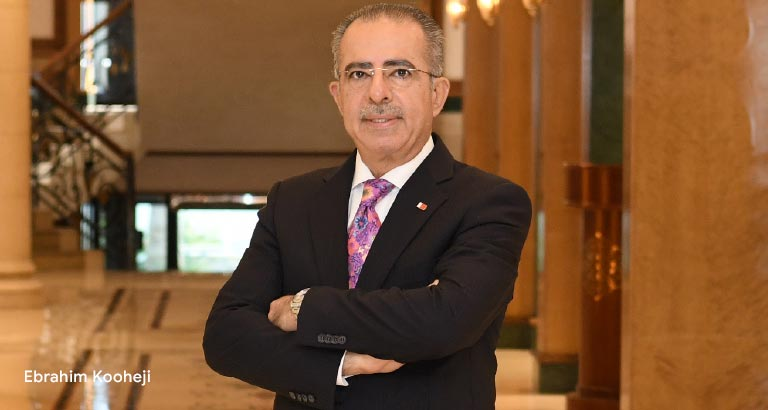 Bahrain’s dynamic hospitality industry sees new faces come and go, but there’s one that has been an enduring industry icon – Ebrahim Kooheji’s.

“I remember the day, in 1981, when a guest furnished a piece of plastic as payment for his meal. As his steward, I just looked at him and asked him where the money was,” Ebrahim laughs, reminiscing over memorable anecdotes in his 40-year career. “I had no idea about credit cards!” This is just one of the many learning incidents that Ebrahim, now Consultant – Business Development with the Crowne Plaza Bahrain, remembers vividly.

In 1979, a positive attitude and thirst for learning enabled the 17-year-old kitchen steward to gain experience in all departments. Along the way, Ebrahim grew not only in rank  but also personally, learning invaluable lessons in teamwork, commitment to the job and the fruits of loyalty to the organisation. “I attribute my success to adapting to changing times. I have worked under 17 different general managers, and have been flexible enough to adopt their style of working,” he says. “Also, I had a role model; a fellow Bahraini who was food and beverage manager of another famous hotel. He was my benchmark, and I focused on reaching his level and ultimately surpassed it!”

Ebrahim took the opportunity to further hone his skills by undergoing training at prestigious institutions like Cornell University in the US and École Hôtelière de Lausanne, Switzerland. Besides making him an able leader, it armed him to oversee the opening of numerous outlets for a hotel chain in Bahrain and a new property abroad.

The watch aficionado (his favourite among many is a significant Rolex purchased years ago) has felt it necessary to contribute to the development of the hospitality industry within the Bahraini community. His efforts to integrate more young locals into hospitality have been tireless, and his honorary services on the boards of many social and government-affiliated organisations, including the Ministry of Education, Tamkeen, Bahrain Chamber of Commerce and Industry, Chaine des Rotisseur and SKAL, amongst others, are well known. “I hope that one day Bahrain has a dedicated hospitality school for its students,” he says.

Ebrahim’s past year has been fraught with the diagnosis of stage-four cancer. “If one fights this disease with a strong, positive mentality, half the battle is already won. I was lucky to receive the best possible care right here in Bahrain,” he says. “Three weeks after a major surgery, I was back in my office, to take my mind off the ordeal. Of course, there are many things that we, as a family, changed after this episode, like not getting stressed with little things. I also maintain a better work-life balance, eat healthier (refined sugar is a complete no-no) and I go fishing more often. When I’m on the boat, I leave my cares on the shore and enjoy my precious time.”

Ebrahim nurtures the ambition to continue dedicating his services to the hotel and the very many institutes he is associated with by being on their advisory boards. He says: “I’m happy to share my knowledge for the development of youth, creation of jobs and enrichment of the hotel industry in Bahrain. I want to inspire youngsters to work hard for success. I have managed to make it, and they can too!”