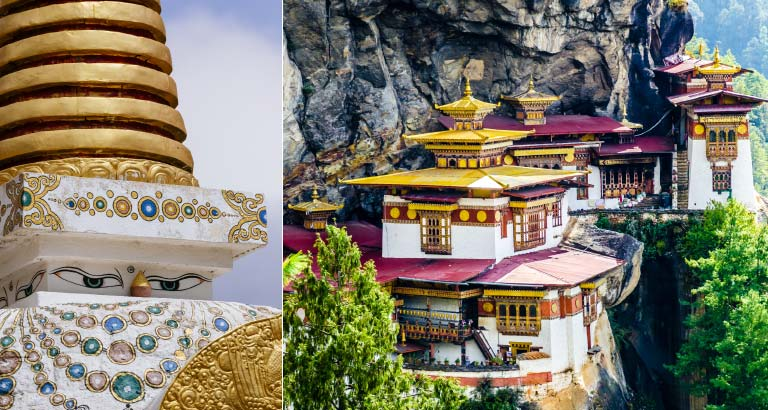 Well-being is not just about hitting the treadmill. We can all agree it’s a matter both mental and physical. So, it’s no surprise that in a month when we’re all about being our best selves, we’re featuring a country which not only has a Minister for Happiness but also coined the phrase “gross national happiness” and has the phrase enshrined in its constitution.

Bhutan is at the top of many 2020 travel lists and it’s not hard to see why. This tiny, landlocked Himalayan kingdom has a strong “high value, low impact” tourism policy which helps to make the destination exclusive while preserving its attractiveness.

And it’s the world’s only carbon negative country, which makes it even more of a draw.

While you’re there you must experience an archery competition – you really must as they are absolutely everywhere, it’s the national sport and very hard to miss. Virtually every village has its own archery field where colourfully dressed men shoot their arrows as silk-clad women sing and dance to cheer them on. There are also various national competitions, which are quite something to witness.

Another ‘must see’ is the Tiger’s Nest or Taktsang Lhakhang Monastery. Though it involves a very steep trek up a rocky path, it’s truly worth the effort and is one of the most enduring and recognisable images of Bhutan. Also make sure to check out one of the many impressive stupas (Buddhist monuments).

The country is, it would seem, obsessed with yetis. An awful lot of people will happily tell you they have seen one and there’s even a national park, Sakteng Wildlife Sanctuary, dedicated to the preservation of the creatures. It’s definitely worth a visit since the ‘yetis’ share their home with other fabulous beasts such as snow leopards, tigers and red pandas.

The Tsechu Festival is a moveable feast celebrated at different times in different regions. It’s a social and trading event where people get together. The highlight is the Cham dance which sees monks in scary masks and fancy costumes going through the age-old steps. Paro Tshechu, held in spring in Paro, is said to be one of the best.

While you’re there, prepare to sample some really good comfort food – remember this is a pretty cold climate, so really warming dishes are the norm. Look out particularly for Jasha Maroo or Maru, a spicy chicken stew or curry you’ll find both on the streets and in cafés and restaurants. Also, make sure to try butter tea, it’s an acquired taste but, hey, you’re there for adventure!