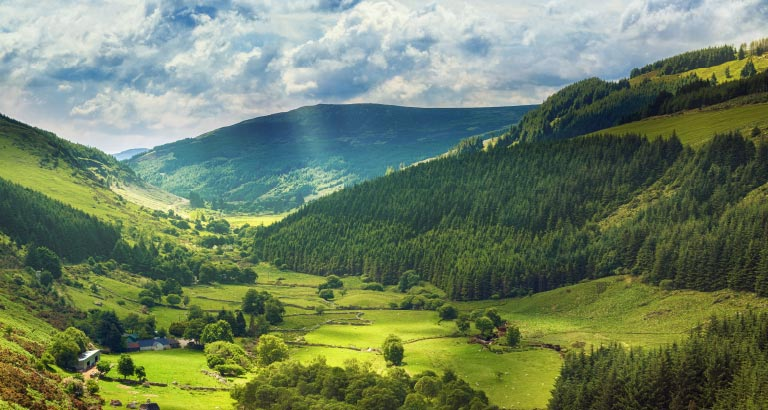 Home to many secrets and hidden treasures, the Emerald Isle is one of the most beautiful and atmospheric places in Europe! A land of craggy mountains, salt-sprayed coastlines, rolling greenery, mysterious Celtic ruins, crumbling castles, leprechaun-dotted forests, shanty pubs set to the ditties of Gaelic folk, rowdy bars with gallons of the black stuff … whatever your tastes, Ireland really is a wonder to behold. By the way, Céad Míle Fáilte means a hundred thousand welcomes, which is what you’ll find in the Emerald Isle.

Folklore tells us that an Irish giant named Finn MacCool once lived in the area. From across the sea he could spy a Scottish giant, Benandonner, his rival, whom he had never met.

Finn challenged Benandonner to come to Ireland to fight. Because no boat was big enough to carry the giant, Finn built a causeway of stones in the water so that Benandonner would be able to make it across. 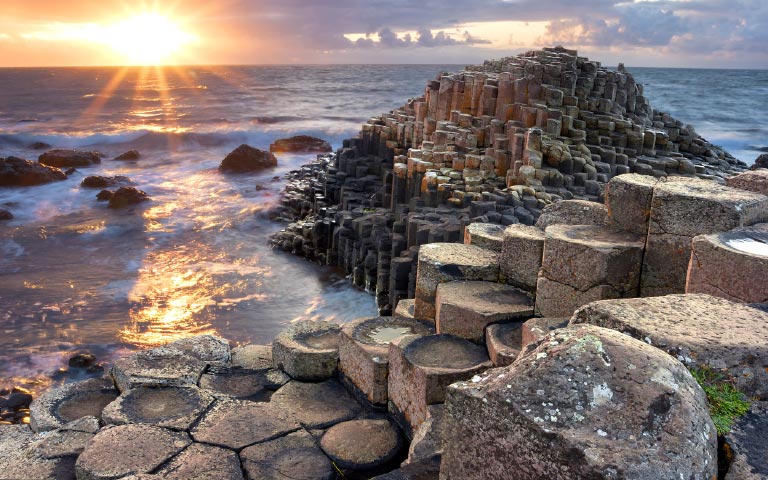 In truth, Giant’s Causeway was created by a volcanic eruption 60 million years ago – an interesting fact, but the Finn MacCool myth is a bit more fun to believe.

No matter how it came to be, the Causeway is one of the best places to walk through in the North.

CLIFFS OF MOHER
One of the most visited natural attractions in all of Ireland, the Cliffs of Moher rise up from the swells of the great Atlantic Ocean like petrified bulwarks of stone.

On top, they are covered with the island’s trademark meadows of verdant green grass, while the waters of Galway Bay crash and froth against the stone below. 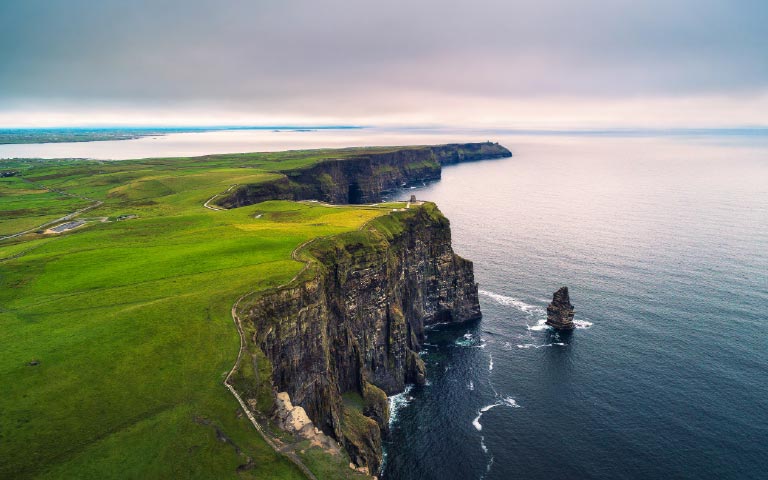 At a whopping 120 metres in height, these great cliffs offer dramatic views of the coastline and the Aran Islands out at sea, while a new visitors’ centre makes it easy for travellers to uncover the hundreds of millions of years of geological history that helped form the strata of sandstone and shale.

Blarney Castle
Forever drawing day trippers out of the centre of Cork, this partly-ruined set of keeps and battlements is high on the list of Ireland’s bucket-list sights. 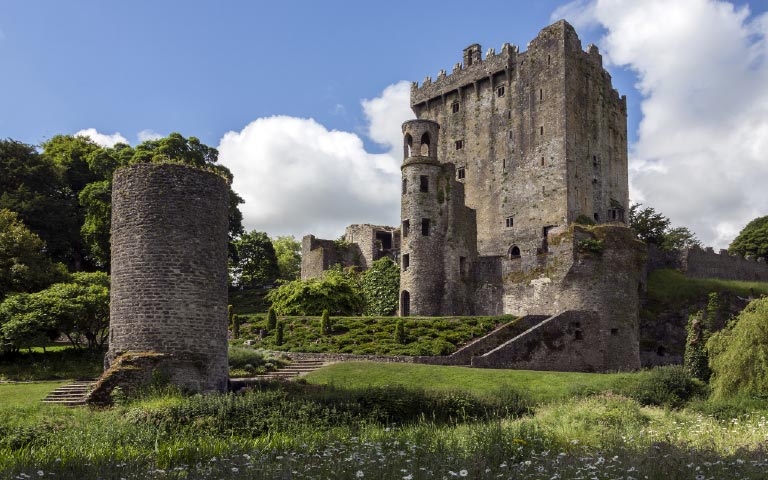 It was built more than 600 years ago by Irish chieftain Cormac McCarthy, and you can tour the massive stone building from its towers to its dungeons. Extensive gardens surround it, filled with stone features and secret corners. Blarney Woollen Mills is known for its sweaters and other knitwear and has a shop selling crystal, porcelain, and other Irish gifts.

The real attraction, however, is the mythic Blarney Stone, which is said to imbue any that kiss it (easier said than done!) with the gift of the Irish gab.

Dublin
Rowdy, raucous Dublin surely needs no introduction! A town of folksy, Guinness-fuelled pubs and elegant Georgian architecture, this capital city continues to draw travellers from far and wide with its cocktail of culture and heritage, class and hedonism. 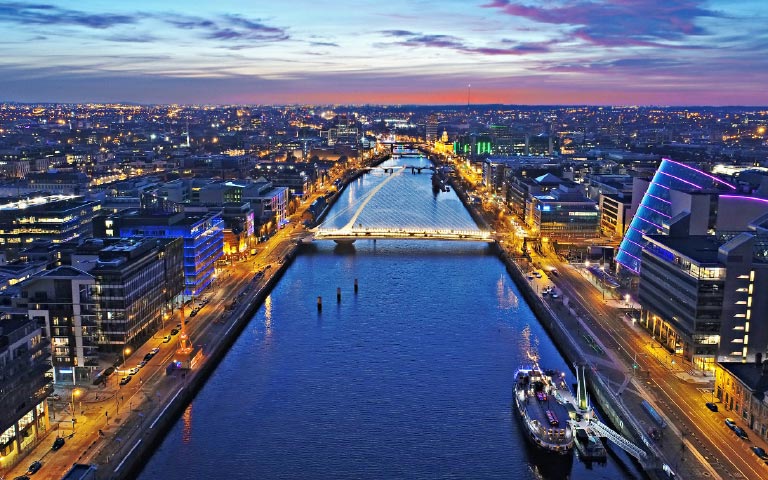 Set midway down the beautiful coast of the Irish Sea, the city boasts the colossal St Patrick’s Cathedral (the largest of its kind in Ireland) and the acclaimed Dublin Writers Museum, where visitors can unravel the lives of Joyce, Yeats et al.

Unsurprisingly, the most popular tourist attraction of all, The Guinness Storehouse, also draws tasters with its brooding ales, while distilleries are never too far away and Temple is famed for its foodie delights, killer restaurants and entertainment spots.

The Rock of Cashel
Ireland’s most visited heritage site, the Rock of Cashel, stars in countless images of the Emerald Isle. Oozing a certain gothic mystery and eerie charm from every one of its Game of Thrones-style turrets and keeps, crumbling walls and crenulated gatehouses, it clings like an ancient limpet to the green hills of County Tipperary in the south. 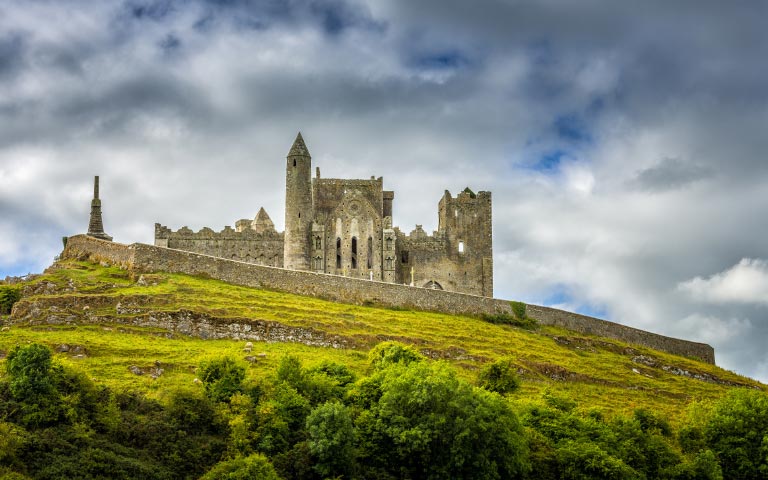 The site was the fortress of the Munster kings way back in the early middle ages, and still hosts buildings like the Round Tower and Cormac’s Chapel from that period – many of which stood up to English invaders in later years.

There are also beautifully haunting graveyards of Celtic stones to see, not to mention sweeping views of the beautiful Munster backcountry.