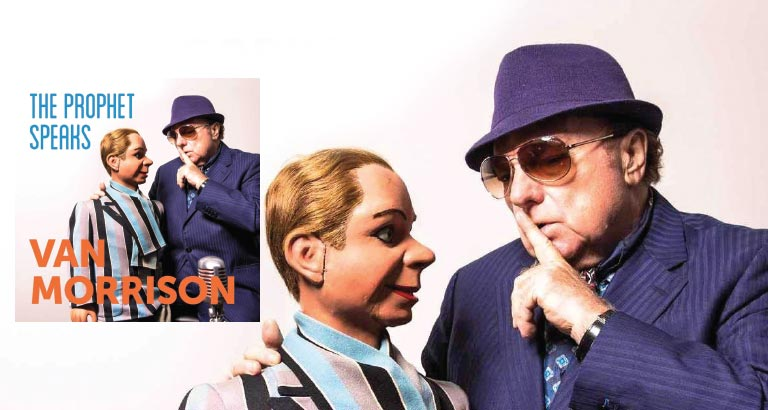 The Prophet Speaks – Van Morrison
Verdict: Another great album from the icon.

What’s the story?
The Prophet Speaks is Morrison’s fourth outing in 18 months. It follows the same musical template begun with 2017’s Roll with the Punches and Versatile in juxtaposing originals with vintage blues, R&B, and jazz covers. This particular set also continues the association he developed with organist and trumpeter Joey DeFrancesco’s fine quartet — illustrated so ably on the jazz-heavy You’re Driving Me Crazy.

Worth a listen?
The Prophet Speaks digs deeper into blues and R&B than its predecessor, but sounds equally loose, joyous, and spontaneous. Its 14 tracks contain six new originals sequenced among eight skilfully performed standards. Clocking in at over an hour, The Prophet Speaks breezes through its run-time with memorable performances and joyous vibes. This is a late-career surge that is all the more remarkable because Morrison really seems to be enjoying himself — he continues to hunger after the music that inspired his vocation in the first place.

Skins - XXXTentacion
This posthumous collection offers a jumble of ideas, fleeting emotions, and stream-of-consciousness freestyles, centred on the swirling darkness within the late rapper. Wading through inessential blips, there are a handful of worthwhile nuggets on which to focus. While the woozy Guardian Angel features an impressive, breathless flow, the disturbing Train food is a discomfiting nightmare that rides a repeated piano chord over sounds of mass transit.

AMOR – Sinking into a Miracle
Glaswegian quartet AMOR channel their various backgrounds and influences into a surprisingly cohesive, focused form of avant-disco. None of the tracks are longer than 10 minutes, and the group experiment more in terms of the production, with a few dubby effects and abstract elements popping up, including the faint vocals moaning in the background of Full Fathom Future, or the trumpet blurts and low-in-the-mix frazzled synths during Glimpses Across Thunder. The rhythms don’t seem quite as bass-heavy, and they slightly deviate from the standard disco shuffle.

Other People’s Stuff –  John Mellencamp
John Mellencamp gives away the intent of Other People’s Stuff with its titles: it’s a collection of covers, 10 songs recorded between 1993 and 2018. Some of these songs come from tribute albums or soundtracks - Gambling Bar Room Blues is taken from a 1997 tribute to Jimmie Rodgers, I Don’t Know Why I Love You was pulled from 2003’s An Interpretation of Stevie Wonder’s Songs - but most come from Mellencamp’s studio albums. Taken as a whole, the album can be read as a summation of what Mellencamp loves about America, which amounts to a political statement in 2018.