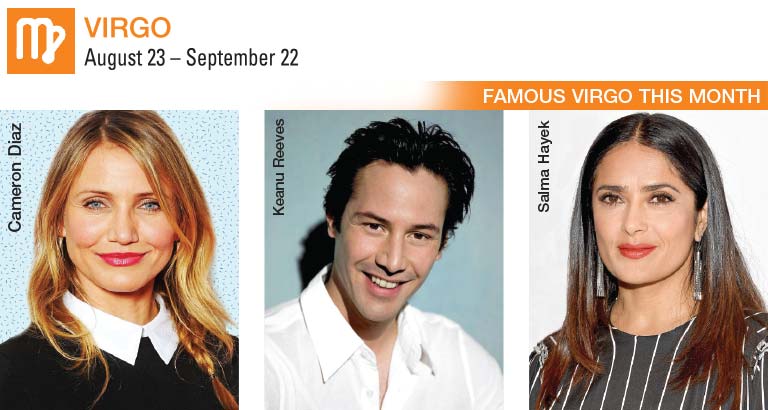 VIRGO
August 23 – September 22
The battle is on as you seek to stamp your authority on a project against some very stiff and competitive opposition. If doubts arise, stand strong because the opportunity for you to impress will lead to better things and even a possible promotion. If your endeavours are of a more creative nature, then there may be a chance to showcase your latest work with rewarding consequences. All of this leads to financial gains, and whilst money doesn’t buy you happiness, it certainly gives you the chance to do what you want.
Card of the Month —Page of Pentacles

LIBRA
September 23 – October 22
An unplanned monetary outlay could leave your finances seriously stretched this month as you are forced to come to terms with a lot more spending than you might at first have realised. Take care who you speak to for advice as dishonesty spills from the mouths of many involved. The shadow of a past indiscretion may rear its head in September and explanations will have to be delivered quickly if they are to be believed and accepted. Be sure not to forget loved ones around the 30th or you may regret it later.
Card of the Month — Ten of Pentacles

SCORPIO
October 23 – November 21
Fortunes are high in September as events in your life improve significantly on previous months and the promise of new opportunities fills you with renewed confidence. If you are contemplating or indeed having any work done within the house, shop around. Hidden extras could leave a simple-looking job carrying a hefty final price tag. On a more personal note, you should watch a child, if travelling, as one moment of absent thought could give you a brief but unnerving scare.
Card of the Month — Queen of Swords

SAGITTARIUS
November 22 – December 21
An unfounded sense of overconfidence will backfire on you this month when you discover that a decision you had been counting on going your way, in fact turns against you. A consideration of where you stand and what you might now achieve in your long-term goals should be addressed. You may be best advised to cut your losses and try hard to begin a new chapter in your life. Stubbornness will only lead to further difficulty for you in the future.
Card of the Month — Five of Cups

Capricorn
December 22 – January 19
September is the month when many of you should finally wake up to the world you are living in and perhaps begin to take responsibility for your own actions – especially in the area of love. Although you could be blamed for being a little naïve when it comes to matters of romance, even the most sheltered of you must realise that if you have a partner, he or she needs some attention now and again. Your biggest crime recently has been one of neglect, and now could be the time when such selfishness backfires on you.
Card of the Month — Ace of Swords

Aquarius
January 20 – February 18
Change is sweeping through your life this month and such movement inevitably means new opportunities as well as the permanent closure of doors that have, up till now, been so often open to you. The end of a long-term friendship could hit you harder than you first anticipated as someone close moves away. This departure may act as the catalyst for a new train of thought that forces you into serious analysis over your own existence and what you do next.
Card of the Month — Two of Pentacles

PISCES
February 19 – March 20
Keep your secrets safe if you must keep them at all – especially where a loved one is involved. If you have a separate agenda outside your relationship with your partner, it is too late to reveal all, so the best advice would be to wind it down and then bury it in the past. If you leave it there then no one will get hurt. However, choosing to continue the pursuit suggests you should beware – you are on very dangerous ground! The omens are not good and a revelation with an uncomfortable outcome awaits you.
Card of the Month — Six of Wands

ARIES
March 21 – April 19
Balance has finally been returned to your love life and, after a turbulent time, you seem to have rediscovered the passion that was absent for large parts of the year. Getting here hasn’t come without sacrifices and there may still be a small pang of regret over the difficult times you’ve had to endure, but now that all the dust has settled, you can’t deny this is where your heart needs to be. At work a new and exciting challenge comes your way, and while you may feel a little nervous at the scale of it, park the fear and you will succeed.
Card of the Month — Two of Cups

Taurus
April 20 – May 20
Many of you will be moving into unknown territories this month with much of the focus around new relationships – both at home and at work. Those of you who are undertaking a new romance should be careful not to allow your hearts to run away with matters because you are still clearly only in the honeymoon period. At work, you could find a colleague who initially came across as obstructive but turns out to be a very useful ally, and he will be key to the success of a project you intend to implement.
Card of the Month — Two of Wands

Gemini
May 21 – June 20
September looks like being the month when that particular purchase you have been after finally makes itself available to you. It could be that a relative leaves you some money or even that an investment matures. Whatever the reason, you will soon find that you will be treating yourself to a shopping excursion. On a more serious note, you should beware anyone seeking to take advantage of your good fortune, especially if it is a relative who is playing on your good nature.
Card of the Month — Ace of Cups

CANCER
June 21 – July 22
You will probably be in a reflective mood this month and relationships are high on the agenda, especially those that appear to have struck a dead end. If you feel that your marriage or partnership has perhaps lost its sparkle, then why not try setting aside a weekend where the two of you can rekindle the embers that still exist. A contented heart will go a long way towards allowing you to appreciate the other areas of your life, so make the move before it’s too late.
Card of the Month — The Hermit

LEO
July 23 – August 22
September is the month of reconciliation and a return to the attitudes and ideas of your past as you set about putting your emotional life in order. However, don’t fall into the trap of believing that things will be as they were, because you will be disappointed. You have been a little selfish with your emotions and some people have moved on from where you left them. What you should aim for is a more generous and understanding attitude – one that many of the people around you are more likely to remember you for.
Card of the Month — Queen of Pentacles