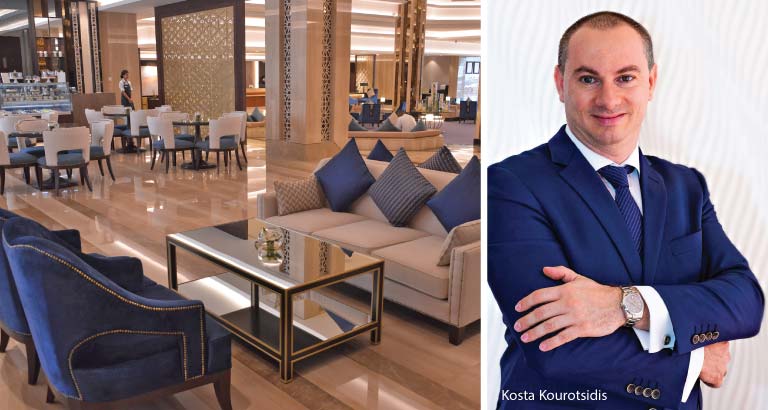 One of Bahrain’s favourite hotels has seen an extensive overhaul that is making heads turn.

The Diplomat Radisson Blu Hotel, Residence & Spa welcomed its first guests in the early ‘80s and has a history of hospitality spanning 37 years in Bahrain. Having undergone major renovations, it has a revamped feel and character, and is poised to be the market leader in the country’s luxury hotel segment. “Being located in a prime area of Manama, the hotel has always enjoyed a special status in Bahrain,” says general manager Kosta Kourotsidis. “I’m sure guests will love the enhanced product and a new, sophisticated ambience.”

With its refashioned blue and beige interior, the lobby exudes contemporary elegance. Floor-to-ceiling columns, bearing glass panels embossed with arabesque patterns, partner perfectly with the statement hues. It is evident that much thought has gone into sprucing up the place to make it modern and welcoming, including the finer details like the upbeat pipe music that instantly lifts the mood and gives the hotel a classy-chic vibe.

“We have added a new outlet in the lobby, called Royal Café, where guests and visitors can have casual meetings, a cup of tea or coffee and a bite to eat,” adds Kosta. The café’s menu offers snacks and beverages, and the display counter holds tempting pastries to savour. Olivos, the all-day-dining restaurant has been given a complete facelift as well.

Guest rooms have been fully refurbished and echo the same cool, blue sentiment as seen at the entrance. “Besides being tastefully appointed, we are very proud that the rooms have been instated with the latest technology,” says Kosta. “They are equipped with IPTVs as also Apple TVs, sensor lighting and bedside docking stations. So, besides having a very pleasing ambience, the rooms also fulfil the technological needs of today’s guests.”

Besides anticipating guests’ needs and delighting them with world-class service, the hotel has gone the extra mile to engage with visitors, thereby giving them a ‘home away from home’ experience. One such example is the Blu Route, that contributes to the guests’ wellbeing, even when they are outside their familiar space. “The Blu Route is a mapped-out path around the property’s vicinity that fitness enthusiasts can follow on their smart device when they want to step out for a jog or a walk,” says Kosta. “There are two routes to select from, which can be accessed on Google Maps through the hotel’s website.”