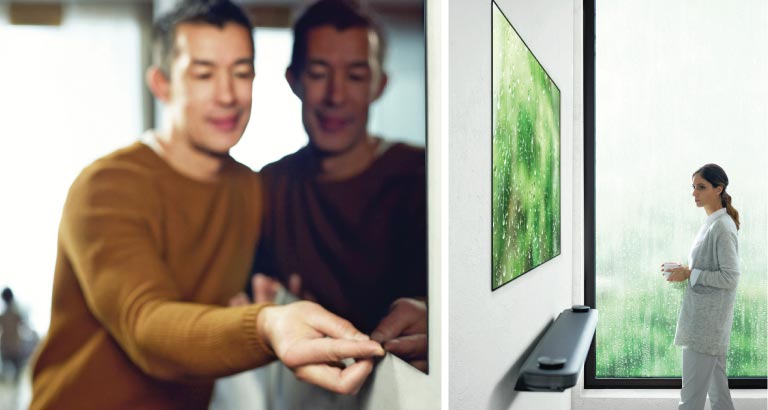 This global leader in home entertainment is redefining the way you watch TV with its latest offering.

LG’s 2017 flagship OLED TV’s latest W7 model features one of the most exciting new concepts with its futuristic ‘Picture-on-Wall’ design. Unlike other TV models, the LG SIGNATURE OLED TV W does not try to hide a clutter of wires and cables. Instead, its screen is separated from its electronical components, while the innovative W-Station integrates all the necessary electronics for sound and the operating system. As a result, this design makes it appear as though the W7 is a window into another dimension with its highly crisp image-rendering capabilities.

This groundbreaking design was made possible thanks to some major innovations in television technology such as the versatile W-Station and an all-in-one ribbon cable which links the station to the screen. Equipped with these new technologies, the new model looks as though it is levitating in mid-air, adding to the sense of immersion.

LG’s design goal has been to eliminate every possible distraction from its display, to create a TV that delivers the ultimate viewing experience to consumers. The company’s aim was to have a TV that only has a display, without bezels or a hefty circuit box at the back of the screen, while sound emanates from a minuscule yet powerful speaker system. This overarching concept finally led to the futuristic ‘Picture-on-Wall’ design.

LG started with a TV that featured a screen, a speaker system and a separate circuit box that resembled an external set-top box. After various simulations, this eventually evolved into the current system with a screen and the W-Station. As a result of the separation design concept, the wall-mounted LG SIGNATURE OLED TV W measures only 3.85mm in depth for the 65-inch model – roughly the same width as three stacked credit cards, while they are placed flush against the wall.

While measurements of other TVs specify where to find “the thinnest part of the screen”, the W7 model has made this term unnecessary with its unique design solution found in the W-Station. It houses a number of vital electronic components and empties the back space of the screen, helping the TV seamlessly sit flat on the wall. With this circuitry-free display, the W7 adds a minimalistic flair to a living room, accentuating all the other aesthetics of the interior décor.

Capable of delivering immersive Dolby Atmos sound, the W-Station also helps put viewers inside the action with rich sound that fills the entire room. Even the space overhead is bathed in powerful, moving audio that flows seamlessly around the audience. Dolby achieves this degree of precision by isolating the relative location of each sound to create incredibly intricate audio that is as rich and multilayered as the real world. In addition, the W-Station is home to all the ports needed for your ultimate home entertainment system.

The LG SIGNATURE OLED TV W also implements new technology in its extremely thin connection cable that transmits a range of signals from various ports to connect the television to external devices, smart TV inputs, broadcast and audio signals, and even the screen’s power source. During the design process, LG engineers and designers worked hand-in-hand to find the best cable material, and considered every aspect including its appearance and versatility.

One of the most difficult things when making a new TV is laying the groundwork for an entirely new structural configuration. For example, every time the TV became 1mm thinner, the display configuration had to be rearranged from scratch to deal with the decrease in allotted space. This meant that in order to create the thinnest TV yet, designers had to be on the same page with circuitry engineers and the manufacturing team at every step of the process.