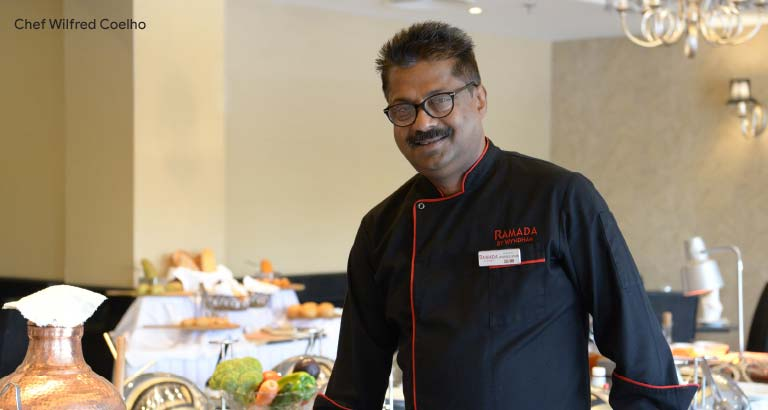 Chef Wilfred Coelho, new Food and Beverage Director at Ramada by Wyndham Bahrain, chats to Behnaz Sanjana about his journey from commis to high-ranking executive and his plans for the hotel.

Food has always been part of my journey. Not being very academically inclined, I really don’t know what other profession I would have taken up!”

Although only two months into his role at the stylish hotel in upscale Adliya, chef Wilfred Coelho is no stranger to Bahrain. He has been the executive chef with a well-known hospitality group, and consultant for numerous restaurant openings on the island since 2001.  “I formally started my career as an apprentice with the Taj group of hotels in Mumbai,” he says. “It was on-the-job training as a third commis chef. I was soon promoted to be first commis, and went on to work in South Africa for around nine years before I arrived in Bahrain.”

However, his love story with food dates back to his pre-teens, helping his brother run a catering business back in Mumbai, alongside schooling. “Food has always been part of my journey. Not being very academically inclined, I really don’t know what other profession I would have taken up!” he laughs.

Since first stepping onto the bottom rung of the kitchen career ladder, chef Wilfred has over 25 years of experience tucked under his double-breasted chef’s coat. But there were road bumps along the way.  “In 1986, it was not well looked-upon for boys from good families to drop out of higher education and work in a hotel’s kitchen. People did not understand why I wanted to do it. It was difficult, but slowly a new trend was set where youngsters started opting for a career in food production.

“Working in a commercial kitchen can get very stressful for a beginner, but there is a joy in finally creating a dish to perfection, after much struggle. And the passion just grows thereon.”

While gaining knowledge of world cuisines, Chef Wilfred stayed true to his roots and specialised in Indian cuisine. “North Indian food is my strong point and, coming from a South Indian community, I also have a special touch for its regional cuisine.” Milking his forté, he has introduced some positive changes to the kitchens at the Ramada by Wyndham Bahrain, like building an actual clay tandoor to serve guests oven-fresh flatbread. He says: “Ramada is a famous brand worldwide and is a promising place to work at. I’ve had an exceptional time so far, and I really appreciate the work culture here.”

Once the clay furnace is ready, Le Jardin, the main dining outlet, will see a revamped menu, focusing on innovative, fusion dishes. “Old-school fare is a bit outdated now and our clientele is dominated by youngsters who know their gastronomy. Of course, we will retain those elements that have kept our loyal patrons returning over several years. A new menu has already been introduced at The Exchange.”

All changes, however, are implemented only after discussion with the kitchen and service teams. “Teamwork is everything. A leader’s innovations should be acceptable to the staff. They are the ones interacting with guests and can tell what will and won’t work. We have employees working here for 15-20 years; I can learn a lot from them. Likewise, I’d like to be remembered for the skills I impart to them.”