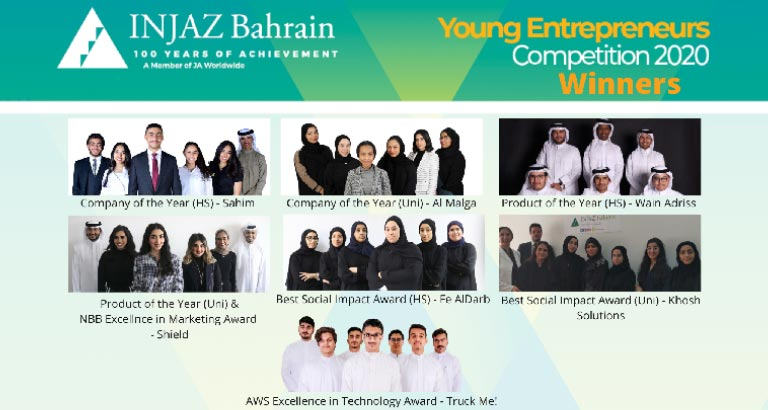 INJAZ Bahrain has concluded its annual Young Entrepreneurs competition, which was held online for the first time. During the virtual competition, 21 student companies from 13 high schools and 8 universities in Bahrain presented their projects virtually to the competition’s judging panel.

The two-day event ran a busy agenda starting off with an Assessment Day on July 6, where students in the High School and University tracks commenced with panel interviews with the judges. The final day of the competition featured the virtual award ceremony where the winning teams were announced and livestreamed on INJAZ Bahrain’s YouTube channel.

The competition witnessed great enterprising and entrepreneurial spirit by the participating students who vied for coveted titles including ‘University Company of the Year’, ‘High School Company of the Year’, ‘University Product of the Year 2020’ and more. Special awards this year include two signature awards – ‘Excellence in Technology Award’ sponsored by Amazon Web Services Bahrain, and ‘Excellence in Marketing Award’ sponsored by the National Bank of Bahrain.

Over the past 15 years, more than 240,000 students have benefitted from INJAZ programs.