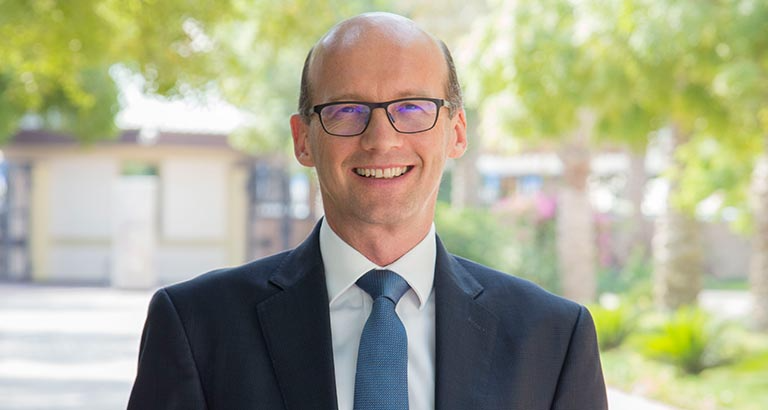 St. Christopher’s School is one of the Kingdom’s premier British curriculum educational institutes with a history stretching back more than 60 years. Principal Simon Watson spoke to us about the school’s links to the UK and its plans for the historic Platinum Jubilee celebrations.

Simon Watson’s career has taken him from the UK to Copenhagen, New Zealand, Malaysia and now the Kingdom of Bahrain, where he has been the Principal of St. Christopher’s School since 2018.

Since then, the school has continued to win awards and maintain its position at the very top of international rankings, with Spear’s magazine ranking it as one of the top 100 schools in the world.

One of its proudest achievements is fostering a diverse student base of approximately 2,300 students comprising more than 70 nationalities, including many of Bahrain’s British expats.

It is an exciting time for the school, which has spent the last couple of years preparing and perfecting its ‘Education for a Shared Humanity’ curriculum which focuses on six key facets: Academic, Metacognition, Service, Enterprise, Digital and Wellbeing.

Mr. Watson says: “The school was established in 1961 as a product of St. Christopher’s Cathedral, and by 1975 the constitution of the school was put together, which we still adhere to now as much as possible 60 years later.

“One of the founding principles mentioned is that the school must offer an education that will allow students to go back and pick up their education in the UK. This is something we still adhere to and in fact, last year 45 percent of all of our graduates who went on to further education went to British universities.

“I think intercultural understandings are really important. Our mission statement is education for a shared humanity, which is all about learning and living with other people, so we try to celebrate that cultural diversity and it’s important socially and educationally for students at a young age to become accustomed to others.”

The school also chooses to be inspected by the British Schools Overseas body and uses the British curriculum and examinations for its students.

Furthermore, the school hosts fairs in which they bring representatives from international universities to help support students with their applications for higher education, while the school itself has specialised university counsellors and heads of year to facilitate decision-making.

Mr. Watson explains: “We have a programme in place where we help students who have not lived or even visited the UK before to undergo that transition. This includes basic things like transport, food and how to register with a doctor’s surgery.”

The school is very proud of its British influences, and this month plans to host a number of events to celebrate Her Majesty Queen Elizabeth II’s Platinum Jubilee.

A ‘red, white and blue’ day will be held to celebrate the occasion and the children of the primary school campus in Saar have written to the Queen. There will also be ‘street parties’ held within the school with bunting, flags and more, which the British Ambassador HE Roderick Drummond will attend.

Furthermore, a brass band will be playing, there will be educational assemblies about the 70-year historical reign and a version of the ‘Great British Bake-off’.

Mr. Watson says: “On the auspicious occasion of Her Majesty’s Platinum Jubilee, St. Christopher’s community congratulates and celebrates Queen Elizabeth II on her momentous achievement. As a community, we join together with millions of other families around the world to celebrate The Queen and her 70-year reign.”