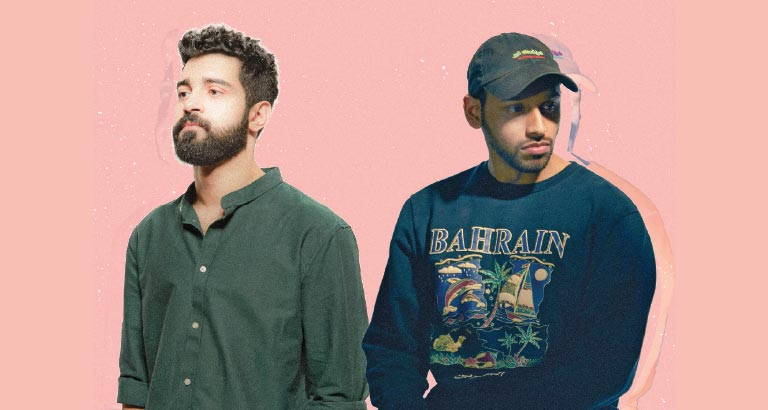 BTM caught up with Bahrain-bred musical duo Dar Disku as they prepare to strengthen their British connections with a UK tour.

So, who are Dar Disku?
Dar Disku are Vish Mhatre and Maz Almaskati. Dar Disku is a record label and collective formed in Bahrain and now living in the UK. The label acts as a platform for creatives, including musicians, artists, filmmakers and more, to showcase their work.

What’s the Bahrain-British connection?
We moved to the UK in 2011 for education. Our connection with Britain existed much before this though as we grew up in Bahrain and went to a British international school. Being in this atmosphere, we had many friends from the UK who introduced us to the Brit sound that was so big at the time, all the way from UK hip hop and grime, with artists such as Wiley and Dizzee Rascal, to the label scene such as XL Records. Hearing this sound really inspired us to move to the UK.

Where did you meet?
We met at school in Bahrain. We have known each other for over 15 years and are pretty much brothers by now. We met each other at friends’ house parties and realised we always had similar taste in music. We would share mixtapes and compilations.

What’s in a name, why Dar Disku?
Dar Disku translates to home of the disco. It was appropriate because we wanted to name the label after the sound that inspired us.

When and how did you start working together?
We had an initial meeting in east London during the autumn of 2018. We sat down and realised that the Middle Eastern music scene was on fire and we also needed to give back to the region that made us fall in love with music. We thought about putting a name to a project and discussed the idea of merging old and new. Next thing, we were playing shows across the world and we had signed our first artist.

You’re described as ‘cratediggers’; for the uninitiated, please explain.
“Cratedigger (plural cratediggers) (slang). A person who habitually looks through crates of vinyl records at music shops, especially in pursuit of rare or interesting albums.”

That’s the traditional definition, but for us it’s much more – looking for films, photos and stories of our region. Not just in record stores but in everyday life!

What are some of the gems you’ve come across in your searching?
Our favourites right now are a disco version of Sidi Mansour which seems to light up dancefloors. We also found an old Turkish disco hit called Kent Yasami by Senay which is a heater. We recently found an Arabic version of the Macarena which seems to go down a treat.

How would you describe your sound?
A sonic blend of the pre-millennium Arabian disco, dabke and folk sounds within the modern Arabian music scene. Our sets range from ‘60s Arabic swing to red line clipping dabke and Arabic trap!

What inspires you?
Pretty much anything that has a story behind it. Whether it’s a new artist with Arabian roots, a film, someone’s photography collection, old posters. It all inspires our workflow and process.

You’ve had some pretty amazing reactions so far, how does it feel to be getting your music out there?
So, so good. We will never tire of meeting people we don’t know and hearing how they came across our music. The press response has been very encouraging with people like [UK magazine] Clash, Resident Advisor and Mille World saying some nice things. This means a lot as these are publications we look at for inspiration. We also have so much fun during our live shows and seeing people from all backgrounds (Arab or not) dance!

You’ve got a tour starting in the UK this month, will you be coming to play in Bahrain and the wider region any time soon?
We hope to be back in autumn and are currently looking at shows in Dubai, Lebanon and more. If you want us in a city near you, get in touch! We love playing new places.

Where can local fans hear your music?
You can find out everything about us on www.dardisku.com where you can catch up with latest releases, live dates, Spotify playlists and get in touch.