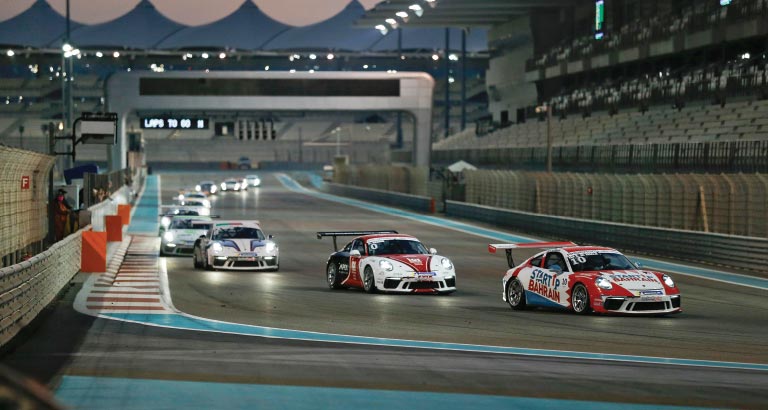 Dick Potter looks at the history of the GT3 Cup Challenge series and gives us the low-down on the championship.

Pretty much anyone with a modicum of knowledge on global motorsport racing will know that Porsche – especially its 911 model – have always featured strongly over the years. A major accomplishment for Porsche motorsports was the inauguration of the Porsche Mobil 1 Supercup in 1992.

For the Porsche GT3 Cup Challenge series, all compete in identical Porsche 911 GT3 cars – hence the moniker, ‘one-make series’. The teams are now using the seventh generation of the 911 GT3. Its features include a 485bhp, sequential six-speed paddle-shift gearbox, aero pack and performance friction brakes. Such homogeny not only places every driver on the same playing field or, rather, circuit, it also guarantees best preconditions and a fair competition for drivers and spectators alike. Conversely, technical or design

inconsistency can sometimes provide considerable and possibly decisive advantages in F1 races.
At the onset, the circuits raced on by the GT3 Cup Challenge series were European; but this has spread globally and the Middle East was introduced into the calendar in 2009. Lechner Racing provides the chariots and organises the event series on Middle East circuits that include Bahrain and the United Arab Emirates – Yas Island and Dubai Autodrome.

The series, which is based here at the home of Motorsport in the Middle East, was originally created to give homegrown Arab driving talent an opportunity to develop their racing potential on top professional circuits. Now in its ninth season, to me it’s arguably the region’s most exciting and successful car racing series on the calendar. OK, I love Porsches, so not even remotely biased then!

Given the extreme climate challenges our region faces, in order to regulate temperatures the GT3 series takes place in our winter. This is not only for the drivers but also the cars and their tyres – they’re Michelin, in case you didn’t know – and of course their support teams.

Running this season from November to April – the first race was on 17/11/17 – this year’s series’ two final rounds will excitingly culminate on the Bahrain International Circuit on April 7 and 8. The 8th also, of course, is the date for the F1 day and it’s also the missus’ birthday – that should earn myself a brownie point for popping that in! The current overall leader of the GT3 Cup Challenge is Tom Oliphant. Hot on his heels, or wheels even, is Al Faisal Al Zubair and Charlie Frijns pressed by Isa S Al Khalifa. Interestingly, besides the main championship, there are also stand-alone Silver and Bronze league categories and, as if that’s not impressive enough, there are rookie and team challenge categories too.

Those clever Porsche chaps manufacture their 911 GT3 cup cars on the same production line as the 911 road car. Who knew that, then? The race tuning is carried out on a circuit by a professional race driver prior to delivery to the customer. Even more interesting, some 3,031 GT3 cup Porsches have been built since 1998 (996, 997, 991 models), making it the most produced and sold GT racing car in the world.

I definitely have to add a GT3 to my wish list then; perhaps the winner of this year’s Bahrain GT3 Cup Challenge might even let me have an interview and test spin in his GT3 after the race!

Best of luck to all the drivers!