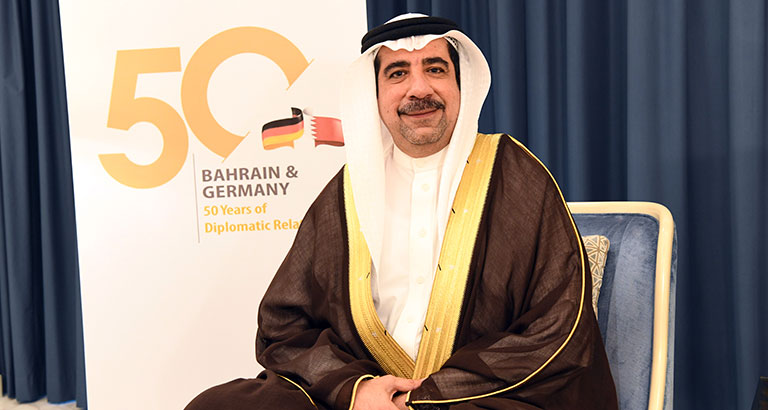 Ambassador of the Kingdom of Bahrain to the Federal Republic of Germany, HE Abdulla Abdullatif Al Shaikh Abdulla, highlights the diplomatic relations between the two countries in this conversation with George Middleton.

Your excellency. You’ve had a distinguished career since joining the Ministry of Foreign Affairs in 1981. Can you give us a brief summary about your diplomatic postings and missions so far?
In 1981, I was the Director of Finance and Administration at the Ministry of Foreign Affairs. A few years later, I went to Glasgow to continue my education and receive my master’s degree. Four years later, I had my first diplomatic post as the Deputy Head of Mission in London – a post which I held for almost five and a half years.

I was then appointed as a permanent representative to Geneva dealing with the multilateral issues and, of course, a nonresidential ambassador and permanent representative to Vienna as well. It was then that I’d spent five and a half years in London and almost four years in Geneva. This was followed by appointment as the Under Secretary at the Ministry of Foreign Affairs from August, 2009 to almost October, 2017. Finally, in February 2018, I went to Berlin as the Kingdom of Bahrain’s ambassador to Germany, where I have been since.

How do you find living in Germany and what would be your key observations about it?
To be honest, and to keep a long story short, starting with Berlin as a German city; I believe if you do not like Berlin, something is wrong with you, not the city and so you have to adjust yourself. It’s a beautiful city with a very rich heritage. I can say it’s ‘a kitchen of the world’ in the sense that you can find a lot of think tanks.

As a diplomat, it’s a very important post with a lot to cover. It’s one of the biggest economies in Europe, and it has a lot of areas where we can have a good cooperation. In terms of diplomatic works, it’s not all concentrated in Berlin, you are dealing with 16 regional states which is very challenging.

What do you consider to be your most significant achievement so far in your posting in Germany?
Oh, there are plenty of achievements! Of these, the one that I would consider the most important is our success in increasing our trade between Bahrain and Germany. As I’d mentioned, Germany is one of the biggest European economies and so, we found a lot of areas for cooperation and have been very successful since I was there. In fact, despite the pandemic, we’ve always had an increase in our trade and exchange investment between Bahrain and Germany.

For instance, last year we recorded an increase of six percent in our trade with Germany, which is very important as it is an achievement considering the pandemic. Prior to that, we would record even higher percentages, over 20 percent even.

Would you say that trade is your most important concern?
It’s not our most important concern. It is such a wonderful country and we enjoy a very friendly relationship. Politically, we have a very good understanding that we have been working together for, which has resulted in us celebrating 50 years of our diplomatic relation. We never had challenges which were difficult to be solve in political and multilateral fields. I believe that there are areas in the economical field that we can improve. So, while trade is one of the most important things, that doesn’t mean that we don’t concentrate on other areas which we believe have better opportunities. We can work together and increase the exchange of trade and have more investment from Germany towards Bahrain and open new areas of cooperation between our countries.

How many Bahraini expatriates live in Germany?
Usually, Bahrainis don’t go for economic reasons to live to Europe, but they go for other purposes like better education and aspects of the services sectors. So, the number is really very limited. I think we have around a hundred, the majority of them being students in different fields, but mainly in the medical field.

We also have some of our doctors who are practicing their experience in Germany. These doctors have also really contributed at certain German hospitals during COVID. They’ve really been recognised as people who contributed in the fight against COVID. We also have a small number of people who lived there due to some business, mainly in real estate.

Recently, our Minister of Foreign Affairs was in Berlin to attend the Berlin Energy Transition Dialogue. Here, we found areas of cooperation which we have been working very hard for, especially moving towards the target of net zero carbon emissions for which the Kingdom of Bahrain has plans, with His Majesty King Hamad and the Crown Prince and Prime Minister, His Royal Highness Prince Salman bin Hamad Al Khalifa projecting the year 2060 to be our target for zero emissions.

We hope to reduce these emissions by 35 percent by the year 2030 and are hence looking into alternative energy options. Germany has a lot of areas of potential cooperation where this is concerned such green energy, hydrogen, water waste management, and renewable energy. These are very new areas for cooperation and we’ve had two workshops, in this regard, with stakeholders from Bahrain and Germany.

What image of Bahrain do you like to project through the embassy in Germany?
Bahrain has always been known for its friendly business environment which we try to promote. For the last three or four years, the Kingdom has been ranked as one of the top five countries, which has been able to attract direct investment globally which is an important point to highlight. People, not only in Germany, but the whole of Europe should know about this and why Bahrain is attractive to businesses. Bahrain has an advantage of skilled workers, advanced regulations, a great social life, environment and roads, and freedom of faith, which is why a lot of companies consider having their headquarters in Bahrain - something that everybody’s very proud of.

We are also extremely proud to support His Majesty’s King Hamad Global Centre for Peaceful Coexistence, whose objective is to promote peaceful ideals worldwide, especially at times like these. Our project reflects the reality of life in Bahrain which is the perfect example of how people can live together despite any differences in race, religion or nationality.

What plans does the Bahrain embassy in Germany have to celebrate the 50th anniversary of bilateral relations?
I’d like to first say that just as we have with our leadership, His Majesty King Hamad, and HRH the Crown Prince and Prime Minister, the leadership of the president of Germany, Frank-Walter Steinmeier, the new German Chancellor, Olaf Scholz, and Angela Merkel before him has given us the boost of working together and having a better cooperation.

We have already begun our celebrations which we shall continue until the end of the year. We are planning a kind of concert, a gathering with businessmen in Germany and articles to highlight these historic relations in the press. We will also be producing memorabilia for the occasion. I am positive that the relations between Germany and Bahrain will continue for many years to come and look forward to our two countries. celebration of a Diamond Jubilee in the future. 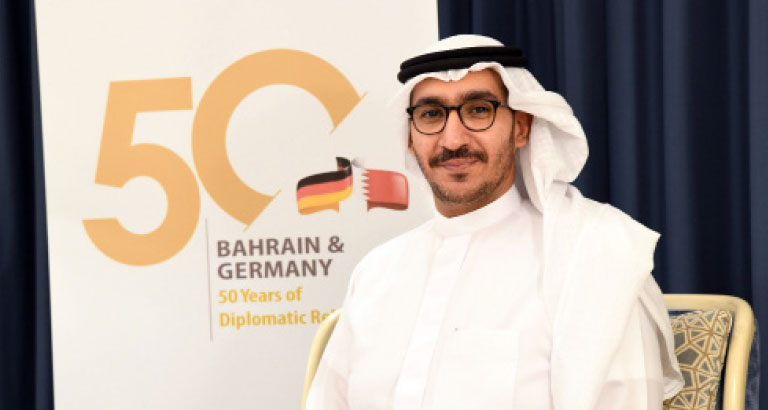 Commenting on the diplomatic relations between the two countries, Ministry of Foreign Affairs Chief of European Affairs, Ahmed Ebrahim Al Qarainees, said: “These 50 years mark a very strong, lasting and varied relationship with Germany. The Kingdom of Bahrain has worked very closely with our friends in Germany and our ambassador who is leading the efforts with the guidance of His Majesty King Hamad and His Royal Highness the Crown Prince and Prime Minister in a complete strategy which includes working with our friends to develop an understanding of global coexistence as well as peace and prosperity across the world.